The Transaction Support Centre has been open for just over a year.  In the beginning, the TSC team at the Desmond Tutu Sports and Recreation Centre in Makahaza, Khayelitsha, Cape Town, met with local community groups, the local councillor, estate agents, conveyancers and residents themselves, to explain the services they offered: assisting buyers and sellers transact formally, and ensuring that property owners can realise the asset value of their housing by legally owning their claim with a title deed.  It has been difficult, but rewarding: they are starting to get traction and see some successes.  As at 17 September 2019, the TSC has facilitated seven title deed handovers and has another five transfers currently lodged in the Deeds Office.  The process to regularise title and hand over a title deed to the rightful property owner is complex, time consuming and expensive.  It takes months, and depends on the active participation of so many of our partners: officials at the City of Cape Town and the Western Cape Department of Human Settlements, lenders, our conveying partners Norton Rose Fulbright and Abrahams & Gross, and others.  We are therefore delighted to report that the TSC was able to regularise four informal cash sales, provide the first transfer on a property for three properties, and facilitate two intestate transfers and one donation transfer.

This note shares the stories of five of the TSC’s clients who are now the proud, legal owners of their properties. 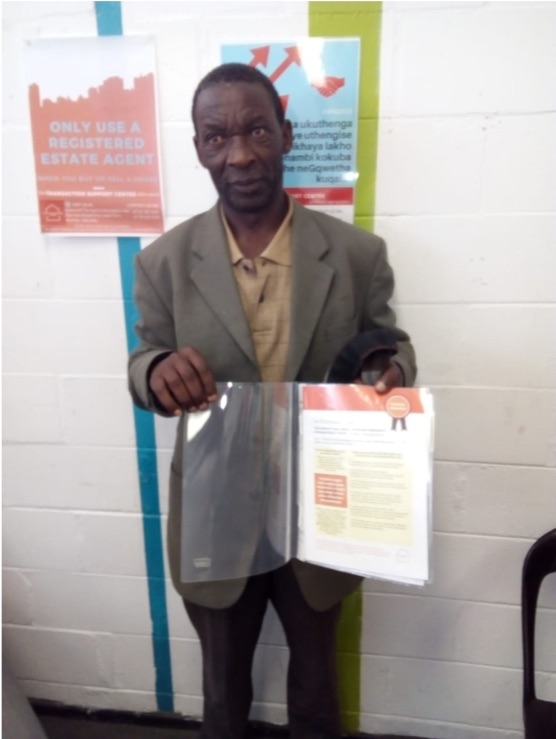 In November 2018, Mr Cube approached the TSC asking for assistance with transferring his deceased father’s property into his name. On investigation the TSC discovered that this would not be a simple transfer as the estate had already been transferred to the deceased’s attorney in 2005. The TSC contacted the attorney involved and after extensive engagement managed to negotiate a donation agreement to transfer the property back to our client. In May 2019 the donation agreement was signed by all parties concerned and the transfer could proceed. By August 2019 the transfer was lodged in the Deeds Office and on 4 September 2019 Mr Cube received title to his property in Khayelitsha.

The TSC has subsequently assisted Mr Cube with a will and are in the process of assisting him access a building subsidy to complete a top structure on his plot. 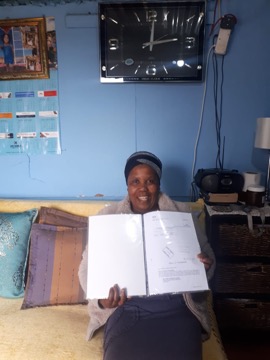 In October 2018, Ms Tekula approached the TSC asking for assistance with regularising an informal cash sale from 2005. The client brought with her a street committee letter detailing the R40 000 cash transaction from 2005 and a few months later came back to the TSC with the contact details and residential address of the seller. Fortunately the seller was living in Khayelitsha which made it relatively easy for the TSC to facilitate the signing of a formal sale agreement. However due to a glitch in the transfer process the first lodgement was rejected and the TSC had to go back to the seller to resign some paperwork – this time he was less co-operative which resulted in a delay to re-lodge. Nevertheless, the transfer was re-lodged on the 23 July 2019 and on 23 August 2019, Ms Tekula finally received title to a property she purchased almost 14 years ago.  The TSC has subsequently assisted MsTekula with a will and are in the process of assisting her access a building subsidy to complete a top structure on her plot. 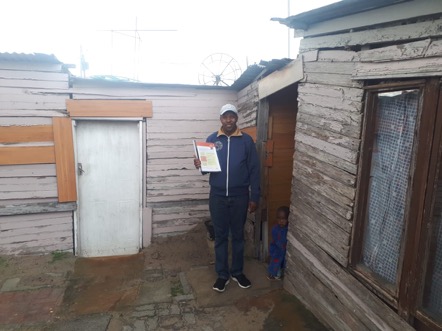 In November 2018, Mr Gaqavu approached the TSC for assistance with accessing his title deed having lived in Khayelitsha without title for almost 28 years. He first moved onto his plot in 1992 and in 2017 signed a site & service agreement with the City of Cape Town to transfer the property into his name. He also brought with him a letter from the City of Cape Town confirming that conveyancers had been instructed to proceed with his transfer that same year. With this information the Transaction Support Centre followed up with relevant City officials and the conveyancing firm concerned to understand the reason for the delay in transfer and to offer our assistance to expedite the process. After several months of follow up, we received confirmation that the transfer was lodged in the Deeds Office in May 2019 and on 23 August 2019 the Transaction Support Centre handed Mr Gaqavu his title deed. Having finally received title to his property, Mr  Gaqavu now hopes to access a building subsidy to complete a top structure on his plot. 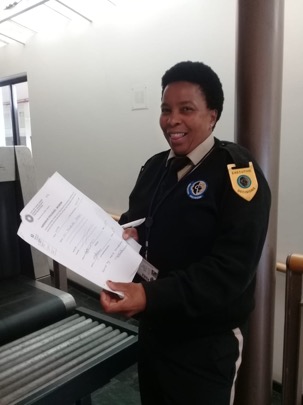 In December 2018, the Transaction Support Centre met Ms Noludumo in the process of looking for a property for sale in Blue Downs. At the time MsNoludumowas looking to sell her house to a cash buyer for R270 000. Having lived in her RDP home for five years she had “had enough of Cape Town” and wanted to move back to her hometown in the Eastern Cape where she owned land and had plans to build a new house.

At first Ms Noludumo very reluctant to accept a bond buyer and, as we discovered, was willing to transact informally as she did not have the necessary documents to transact through formal processes. This was for two reasons. Firstly, the property fell within the 8-year pre-emptive clause as set out in the Housing Act 107 of 1997, which meant she could not sell her property without permission from Human Settlements. Secondly, she was not in possession of the original physical title deed, but she did have a letter from the City confirming that the property was registered in her name and that the title deed had been issued. This letter contained no instructions on how the client should go about obtaining the physical document.

To enable Ms Noludumo to follow formal processes, the TSC offered to help her obtain the necessary waiver from the Provincial Department of Housing giving her permission to sell her house within the 8-year period. We also offered to investigate the whereabouts of her title deed. Within two weeks we had obtained the pre-emptive waiver but the process to locate her title deed took much longer. After numerous engagements with various departments within the City, we established that her title deed was sitting in a box in the City’s Area East office (one of many title deeds sitting in the same box). This, we should add, was after first being told that they did not have the client’s title deed. However, after requesting that they pay for a VA copy of the title deed from the Deeds Office, they managed to locate the document.

During this time, roughly two months, Ms Noludumo was not able to find a cash buyer, as she originally hoped, but with the knowledge that she had a pre-emptive waiver and would soon receive her title deed, she accepted an offer from a bond buyer. On 14 March 2019, almost five years after first moving into her property, Merile received her title deed thanks to the work of the TSC.  With much joy in her eyes Merile exclaimed “my bags are packed, and I am ready to go to the Eastern Cape as soon as my money comes”. 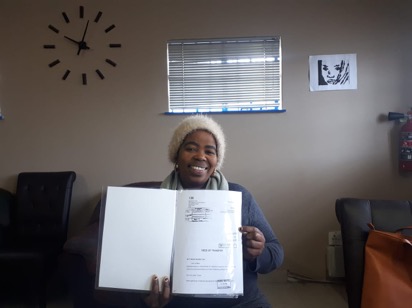 In April 2019, Mrs Mabuya approached the TSC asking for assistance with accessing her title deed. On investigation we discovered this was the second case whereby a client had signed a site and service agreement with the City of Cape Town in 2017 but the transfer had not taken place. The TSC followed up with the conveyancers involved and in May 2019 received confirmation that the transfer had been registered in the Deeds Office. By 23 August 2019 the title deed was received and handed over to our client.

For more information on the TSC and the cases they handle, contact 71point4 at info@71point.com.