Innovations and growth in housing finance requires the efforts and financial commitments of long-term, impact-minded financiers. The Global Impact Investing Network (GIIN) conducts an annual surveyof impact investors around the world to assess their impact, market sentiment, assets, and allocation. In 2019, GIIN received responses from 266 different impact investment institutions. One hundred and seventy of these respondents also responded in the previous year. All respondents in the survey represent institutions, not individual investors. The data in the survey is self-reported.

GIIN estimates that there is over US$500 billion in assets in the impact market, with room and intention to grow. While most investors in the survey were headquartered in developed markets like the United States, Canada and Europe, 49 had headquarters in emerging markets like Sub-Saharan Africa and Southeast Asia. Furthermore, 116 respondents are “emerging market focused” (EM-focused), indicating that many of their headquarters are not necessarily indicative of their goals. GIIN defines EM-focused investors as having 75% or more of assets under management in that market. Of the respondents, 33 investors have three quarters or more of their of assets in Sub-Saharan Africa. Two respondents reported having this amount in North Africa and the Middle East (this latter region is not disaggregated in the report).

The core ideal of impact investing is that financial markets and investors ought to have a positive impact on society. To ensure that the investments are making the desired impact or at the very least are not harming local populations, many investors in the survey indicated that they track all or some of their investments, using qualitative, standardized frameworks like the Sustainable Development Goals (SDGs) or internal proprietary measures. Only 2% do not. GIIN does not have its own framework to evaluate impact. According to the survey, the vast majority perform in line or above their impact expectations since their inception, with only 2% failing to meet these goals. A similar situation exists in terms of financial expectations, with only 9% of investors falling under targets since their inception. However, it is unclear if reported targets were set before or after results.

Housing is the 6th largest sector by quantity of assets under management by impact investors in the survey. Many respondents also indicated a strong desire to raise their stake in the housing industry. Out of a sub-sample of 123 investors, only 2% wanted to decrease housing allocation. Fourteen percent indicated interest in beginning to assess opportunities, 41% intend to maintain existing positions and 43% have intentions to increase their investments in housing markets in the coming years.

Similarly, real assets, which for the most part are residential and commercial properties, make up between 7% to 11% of all assets under management in the survey, depending on whether or not outliers of the survey are included. Real asset deals make up some of the largest by value, worth on average over $20 million at a time. Around 56% of these are residential interests. 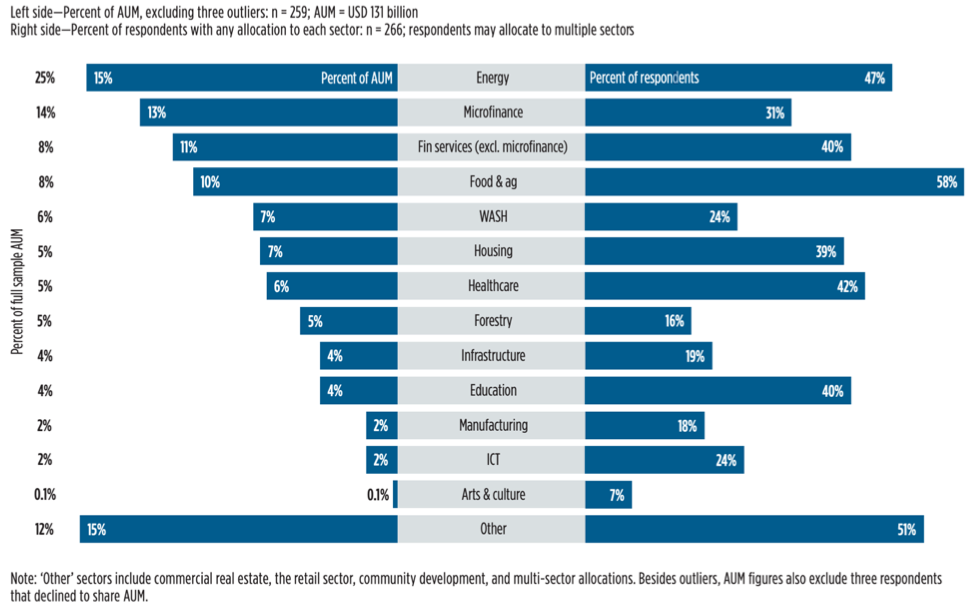 Though housing is a growing sector, it is not growing as quickly as others, and not always in the locations that need it most. In 2014, just under $2.7 billion was allocated to housing impacts, which grew to just under $3.6 billion as of 2018. This means housing had a compound annual growth rate of about 7%. By sheer dollar amount and by compound annual growth, the increased interest in this sector is dwarfed by sectors like micro-finance, from $5.4 to $14.1 billion and energy, from $4.9 to $14 billion. Food and agriculture also grew significantly more than housing in the same period. The initial $2.2 billion invested in this sector in 2014 was less than the amount allocated towards the housing industry in the same year. However, it has now outpaced housing, with about $5 billion in assets compared to housing’s $3.6 billion in 2017.

Another issue suggested by the survey is that impact investors have thus far failed to pursue housing solutions in emerging markets like Sub-Saharan Africa. Out of primarily developed-market investors, 13% hold assets in housing sectors, versus only 1% of emerging-market investors. In real assets, this difference is even more stark, with 26% of developed-market investors holding real assets versus only 0.2% of emerging-market focused investors. Emerging market impact investors vastly prefer microfinance, energy and financial services as sectors to invest in, indicating a disconnect with the needs on the ground.

The GIIN survey does not indicate how the respondents were selected and contacted. Given that the network is headquartered in New York and managed by a largely North American team directors, it is possible that available respondents to their survey were biased in favour developed markets because they were contacted in developed markets. More research will be necessary to confirm or dispute these findings. Understanding the prominence of housing in impact investors’ investment intentions and activities, however, is a critical to understanding the potential for, and direction of, growth in the housing sector.