This profile is also available in French here. 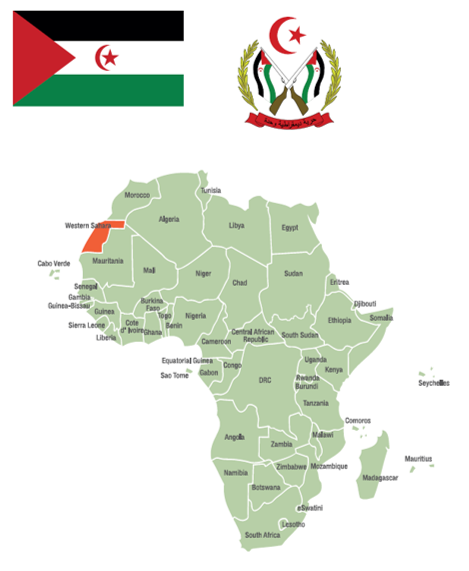 Western Sahara is not officially recognised as a country and is included on the United Nations list of non-self-governing territories. Its domestic legal status is disputed.[1]

Located in Northern Africa, the Western Sahara borders the North Atlantic Ocean between Mauritania and Morocco. Algeria borders it to the northeast. Composing 266 000 sq. km, Western Sahara consists of mostly desert and is one of the most sparsely populated areas in the world. Its population is over 578 536, half of whom live in the largest city, Laâyoune or El Asiun.[2]

Western Sahara is divided due to conflicting views on how this region should be governed and administered. Spain gave up colonial control of the territory in 1975 to a joint administration of Morocco and Mauritania by negating the right to self -determination by the Sahrawis. Following the withdrawal of Mauritania from the conflict, an unresolved dispute remained between Morocco and Western Sahara represented by the Polisario Front (the self-declared government in exile in Algeria). Today, Morocco controls 80 per cent of the disputed territory while the remaining portion is controlled by the Polisario Front. In terms of an international court ruling, Western Sahara remains a territory in limbo with extremely limited access to information mainly due to consolidation of information by the Moroccan government.[3]

Western Sahara has a small market-based economy whose main industries are fishing, phosphate mining, tourism, and pastoral nomadism. The territory’s arid desert climate makes sedentary agriculture difficult, and Western Sahara imports much of its food. The Moroccan Government administers Western Sahara’s economy and is a key source of employment, infrastructure development, and social spending in the territory.[4]

The housing and urban planning sector in Western Sahara has gone through tremendous change since it regained independence from Spain, particularly after the notable success of the various housing programmes and projects led by Morocco, which resulted in several residential complexes that have effectively integrated the urban areas.

The Moroccan plans for the housing and urban planning sector of the Southern provinces aim at increasing the number of houses that are in conformity with the Moroccan social and urban requirements.

According to the official 2004 census, the population of Laayoune Province was 210 023 in 2004, an annual increase of 3.2 percent from 2003. This population is centred predominantly in the urban areas, which accommodate 164 807 people (93.81 percent of the population of the whole region). Only 10 862 people reside in the rural areas. This number exceeds by far the Western Sahara average which reached 51.4 percent in 1994.[5]

An emergency programme lead by Morocco has been implemented in 2014 to build 2 847 decent urban houses, and 2 305 housing lots. The  first section of the ‘return residential development’ housing programme has produced approximately 1450 houses in the city of Laayoune, while the second section is expected to offer around 1 550 houses in the territory of the commune of Laayoune.

In addition, there are other programmes underway relating to the first section of the governmental programme of the city of union, which provides 2 144 residential developments, in addition to the ‘National Reconciliation’ Development Project, which is expected to offer 1 500 modern urban houses.

The Province of Smara is characterized by relative stability, with a population of 60 426 in 2004. The majority of Smara’s population is centred in the urban centre, due to availability of housing in these areas. Some development projects have also been launched in the rural areas, including infrastructure programmes and the provision of basic facilities such as schools, roads, and clinics.

Whereas the population of Oued Eddahab-Lagouira Region reached 36 751 people in 1994, with the urban areas accounting for 85 percent, the Demographic Research and Studies Centre indicates that the population of the region was around 54 000 in 2003.

To find out more information on the Western Sahara, click on the sections below:


Each year, CAHF publishes its Housing Finance in Africa Yearbook. The profile above is from the 2020 edition, which has up-to-date profiles for 55 African countries.

Availability of data on housing finance

On April 4, 2020 the first four cases were confirmed in Boujdour by the United Nations Mission for the Referendum in Western Sahara (MINURSO).

On April 9, 2020 MINURSO reported that two new cases were confirmed in Dakhla, bringing the number of confirmed cases to six.

By June 19, 2020 there had been 26 confirmed cases, the latest of which in Laayoune. One patient had died, 23 had recovered and 2 were still active cases.[1]

Overall, according to the UN Secretary General 2020 special report on Western Sahara[2], the impact of the COVID-19 pandemic in Western Sahara has been limited. As Morocco quickly took preventive and containment measures, only a handful of cases were recorded in the territory until May 30, when a major outbreak was detected in the Laayoune region, there were 41 patients on August 31, 2020.

The Centre for Affordable Housing Finance in Africa (CAHF) promotes investment in affordable housing and housing finance across Africa.