Tanzania is one of the fastest growing countries on the African continent, and is rich in natural resources. At least 31.6 percent of the country’s 53.47 million people live in urban areas, with a population growth rate of almost three percent and an urbanisation rate of five and a half percent per annum.

The country has experienced impressive GDP growth rates over the past decade averaging almost seven percent per year.  The GDP grew by 7.1 percent in year 2015, higher than the growth of seven percent in 2014 the rate is projected to remain at approximately seven percent through year 2020. The strong and sustained economic growth, coupled with a fast growing population (expected to more than double by 2050) have greatly contributed to the fast growing housing sector demand. The housing demand has also been boosted by the country’s efforts to develop its mortgage markets, with the introduction of the Tanzania Mortgage Refinance Company in 2010 under the Central Bank’s Housing Finance Programme. This has had the immediate, tangible impact of the number of mortgage lenders in the market increasing from 3 in 2009 to 28 by June 2016, and the average mortgage interest rate falling from 22 percent to 16 percent.

The positive developments in the housing industry have attracted substantial multilateral and donor support. The African Development Bank (AfDB) which has been supporting the country’s various development agenda since 1971 has recently expressed its commitment to focus on funding the construction of residential houses, development of agriculture and other economically viable areas in Tanzania during 2017, having already approved an assistance package of more than US$1.1 billion for year 2016-2020 to support the country’s transport and energy sectors.

This note covers a broad overview of housing and housing finance markets in Tanzania, drawing on the Tanzania profile in the Housing Finance in Africa Yearbook 2016 (7th Edition), which was launched at the AUHF Conference and AGM, in Abuja Nigeria, 2016. This edition covers 51 countries and five regions across the continent. The full Tanzania profile was written by Anna-Maria Shija for CAHF, and can be found here, while the profile for the East African Community (EAC) can be found here. 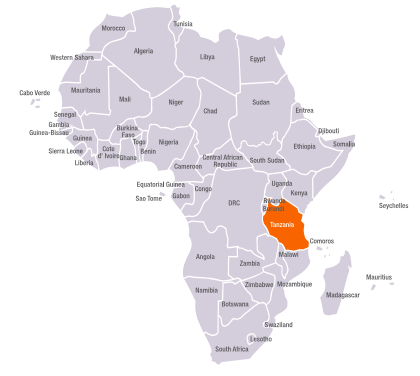 Tanzania has 54 commercial banks and other private financial institutions. The banking sector in Tanzania is regulated by the Bank of Tanzania (BoT). The sector performed remarkably well in 2015. According to the BoT Financial Stability Report of September 2015, the banking sector continued to grow in terms of deposits and assets recording an annual growth of 12.4 percent in total assets and 6.7 percent in deposits to September 2015.

The mortgage market is among the smallest in the East African region (the ratio of outstanding mortgage debt to GDP in 2016 was 0.46 percent). According to 2014 Findex very few Tanzanians – only 4.5 percent of the adults aged 15 years and above report having an outstanding loan to purchase a home.

According to Bank of Tanzania, the mortgage market recorded an annual growth rate in mortgage loan balances of 45 percent in 2015. A key element in the growth of the mortgage market has been the provision of long term funding by the Tanzania Mortgage Refinance Company (TMRC). The TMRC was established in 2010 under the Housing Finance Project (HFP) which was created with US$40 million initial funding support from the World Bank to expand access to affordable housing finance in Tanzania. In March 2015 the World Bank extended an additional funding of US$60 million (with US$40 million being allocated for TMRC) to further sustain the project’s positive impact in the market. Additionally in May 2016, the AfDB approved a Partial Credit Guarantee of up to US$4 million (in Tanzanian Shillings) to support TMRC’s Medium Term Note program to mobilize long term funding from the local currency bond markets which is part of the company’s strategy of ensuring its continued sustainability. As at September 2016, the TMRC has 12 borrowing members (banks) all offering mortgage loans, as well as two non-borrowing members. In July 2016, the company opened up lending to non-member banks as part of its strategy to expand its customer base in order to ensure it continues to effectively fulfil its role of being a catalyst for mortgage lending in the country.  CAHF has prepared a case study on Mortgage Liquidity Facilities throughout Africa, available for download here.

By 30 June 2016, TMRC had extended loans by TZS 45.9 billion (US$20.94 million) to eight of its member banks in a bid to facilitate mortgage lending. Mortgage loans’ average duration has also increased since the creation of the TMRC, from five to 10 years to 15-20 years with typical rates offered by lenders for the mortgage product currently varying between 16 and 19 percent.

Given affordability levels, the microfinance sector is especially important in addressing housing supply in Tanzania and is growing steadily. A study commissioned by the Bank of Tanzania found that 41 percent of Tanzanians who borrow microloans planned to use these for housing construction or improvements. In 2011, a Housing Microfinance Fund (HMFF) was established as one of the components of the Housing Finance Project with a US$3 million contribution from the World Bank. Progress has been slow as no loans were extended up to March 2015 where an additional US$ 15 million was extended for the HMFF (out of the US$60 million extended for the Housing Finance Project) to make a total fund of US$18 million. The first disbursement of TZS 1 billion (US$456 264.74) was made on 31 July 2015 under the microfinance fund to DCB Commercial Bank Plc with the total credit line to the bank being TZS 3 billion (US$1.37million). This has marked the first step towards significant progress of the microfinance sector.

Only ten percent of Tanzania’s total land surface is surveyed for various uses. The lack of land titles remains a fundamental problem in Tanzania as land rights need to be registered before they can be mortgaged. While 650 000 title deeds have been released, the Land registry plans on releasing 400 000 more in 2016/17.

Inflation remains around six percent, credit as a percentage of GDP increased from 13.83 to 15.42 percent, while the cost of a 50 kilogram bag of cement decreased from US$ 7.04 to US$ 5.93 in 2016. This is well above the continental average of US$ 9.79 for a 50kg bag of cement. Mortgages as a percentage of GDP stands at 0.46 percent, while the number of mortgages is 2 981 as of September 2016, reported by TMRC and BoTMortgage Market Update. The price of the cheapest newly built house recorded by CAHF has decreased, from US$ 20 992 last year to US$ 19 801 this year. Note that the data table extracted from the Yearbook does not reflect 30 September 2016 data from the quarterly Tanzania Mortgage Market update as it was published before the release.

For the majority of Tanzanians, mortgage finance is not an option. Using C-GIDD (Canback Global Income Distribution) 2015 income data for Tanzania and 2016 CAHF survey input, we have explored housing affordability. The number of rural and urban households is illustrated per income bracket, defined below. Additionally, the graph provides the national average annual urban household income in 2015 (in constant 2005 US Dollars) and the average annual household income needed to afford the cheapest newly built house in 2016 (also calculated in constant 2005 US Dollars, for comparative purposes), built by a developer. This was calculated by CAHF and is a rough estimate, based on a number of assumptions.

The graph below shows the affordability of market segments across urban areas in Tanzania, in terms of the potential book size (in 2005 constant US$) that might be achieved if each household in the band were to access the loan they could afford (and assuming that this loan could actually buy a housing product that was suitable for their needs). This is shown assuming a bond term of 25 years and an interest rate of 18 percent (based on current averages in Tanzania). It is estimated that 3.2 percent of urban households could afford the cheapest newly built house, formally built by a developer, priced in 2016 at US$ 19 801 (US$ 14 878 in 2005 constant US$). Effectively, this represents approximately 110 967 potential loans – significantly more than the 4 065 mortgages that currently comprise the Tanzanian mortgage market. This indicates the potential for the expansion of the mortgage market in Tanzania.

At the same time, the bulk of the population earns less than the US$9 797 needed to afford even this very basic house. The greater investment opportunity, therefore, must be the incremental housing delivery and financing market. It is in this space that the Central Bank’s Housing Microfinance Fund is targeted and where substantial growth can be expected. Using a housing micro finance loan with a term of five years and interest rate of 24 percent the potential loan book size is US$4.3 billion. 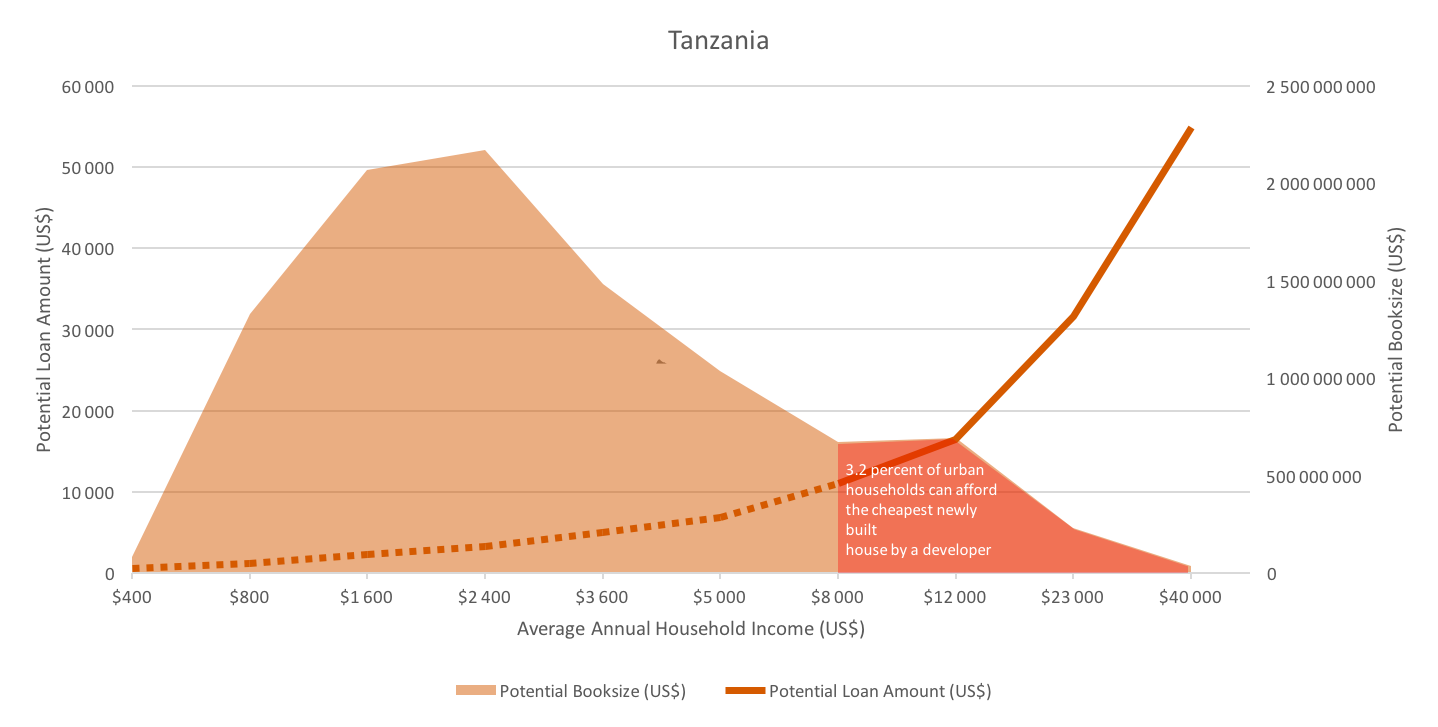 While the cost of the cheapest newly built house formally built by a developer is quite low by regional standards, supply of these units is limited and most units under construction are priced much higher. Middle income two to three bedroom units on the outskirts of the capital, Dar es Salaam, range from US$30 000 – US$150 000 in areas such as Kijitonyama, Kinondoni and Mbezi Africana. In higher income areas such as Mikocheni, Upanga, Masaki and Oyster Bay, three to four bedroom units are generally priced at between US$200 000 and US$3 million.

The Public Servants Housing Scheme involves the construction of 50 affordable housing units over five years, and administered by Watumishi Housing Company (WHC). In November 2015 WHC launched a construction drive of 800 houses in four regions namely Tanga at Pongwe area (40), Mwanza at Kisesa Township (59) and Dar es Salaam which will receive the bulk of the houses to be built in Kigamboni (369), Bunju (71) and Magomeni Usalama (104).

The National Social Security Fund (NSSF) is in the middle of constructing its housing development in Kigamboni (the Dege Eco Village satellite city) which will bring 7 460 housing units to the market by 2017. Total project costs are estimated at around US$544.5 million.

Avic International has continued with implementation of the Avic Town project in Kigamboni with plans to build 5 000 housing units in the next three years.

Visit our Tanzania page to access blogs, documents and other useful publications on the housing finance system in Tanzania.