As part of our Housing and the Economy project, this report uses CAHF’s Housing Cost Benchmarking and Housing Economic Value Chain Modelling methodologies to analyse the Ugandan housing market. The report provides an overview of the structure of Uganda’s housing supply and demand for housing and determines the contribution of housing construction and rental activities to Uganda’s economy. Further, it provides a basis for comparing the costs of constructing housing in Uganda in relation to housing costs in other African countries. These analyses are used to identify key areas of Uganda’s housing system that can be improved to maximise the potential production of owned and rented housing that better matches the demand profile of Uganda’s urban and rural households. 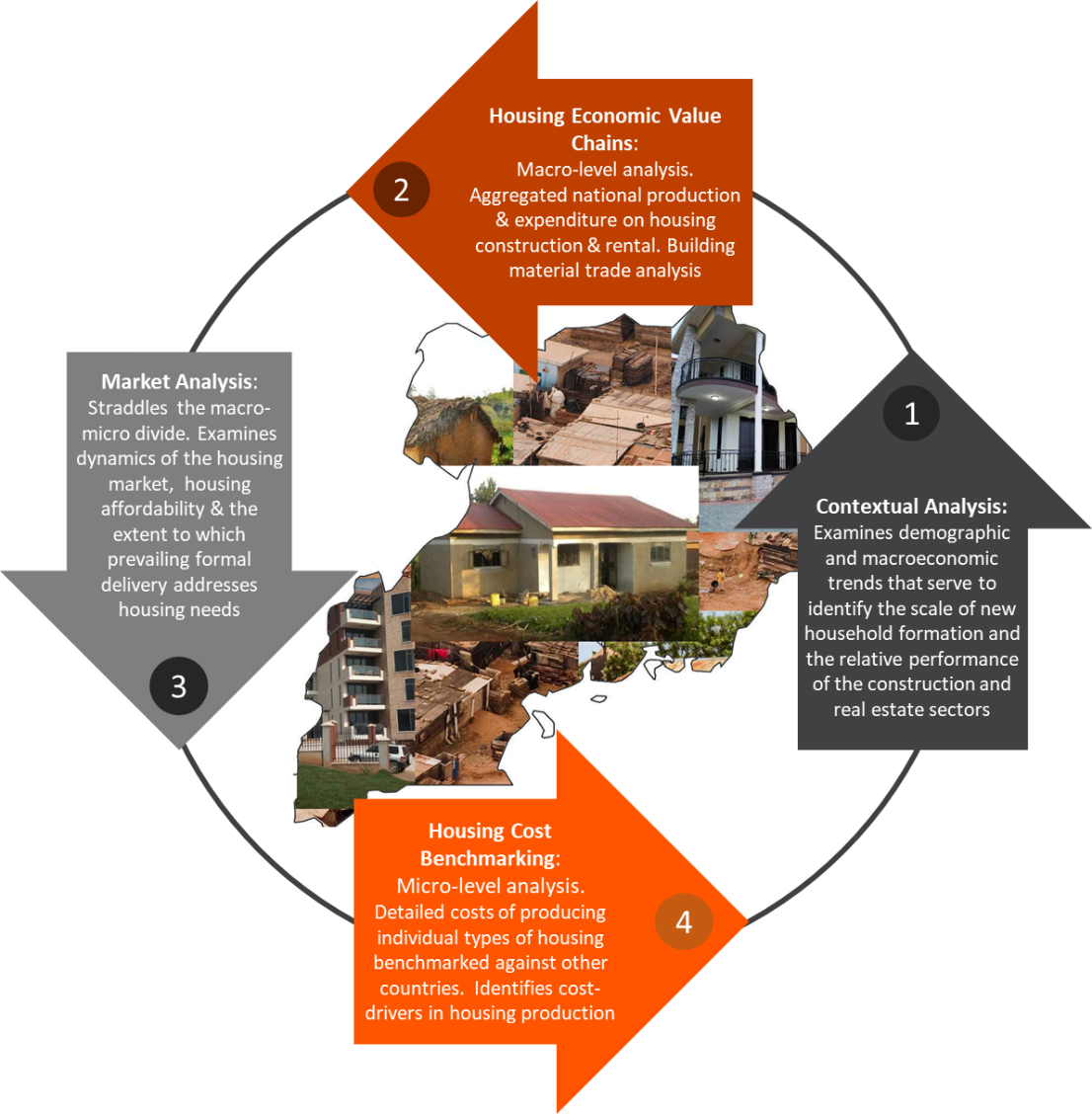 Uganda has a population of 46 million people in 2020, growing at a rate of 3.6 percent a year, making it the country with the third-highest population growth rate in Africa. With a projected urbanisation rate of 5.6 percent per annum, Uganda’s urban areas are poised for rapid increases in households requiring decent, affordable housing. Uganda’s urban households will grow from 2.9 million in 2020 to 3.8 million in 2025—a total increase in housing needed of 180 000 units per annum.

CAHF’s Housing Economic Value Chain analysis estimates that housing construction and rental activities contributed a combined output of 11.0 percent of Uganda’s GDP in 2018 at UGX12 135 billion (US$8 460 million). Seventy-five percent of the intermediate inputs were sourced from secondary sectors (a majority of which are locally manufactured goods), 22 percent from tertiary sectors and only 2 percent from primary sectors.  Breaking this down into the housing construction and housing rental value chains, in 2018, Uganda invested almost UGX 8 trillion (US$ 2.1 billion) in the construction of housing, while the total economic value added from residential rental services was UGX 4.1 trillion (US$ 1.1 billion). This relatively under-developed rental sector is due to the relatively small proportion of urban households that rent (29 percent), as well as to the under-developed nature of the rental sector, where most rentals are provided by small-scale and household landlords.

CAHF’s Housing Cost Benchmarking methodology defines six key housing typologies and size configurations, specifies their design and completes a detailed cost breakdown for Kampala, Uganda. Comparing the cost of a standard 55m2 house in Kampala against  major cities in five African countries,  the cost benchmarking shows that Kampala has the third-highest construction cost (US$58 596) after Pretoria, South Africa (US$40 199) and Lagos, Nigeria (US$52 103). In total, 43 percent (US$25 092) of the total cost of developing this standard house is for construction-related inputs, showing that 57 percent of the total cost of developing such a house is for other cost items. While Uganda’s housing development costs are in the mid-range of five countries benchmarked in sub-Saharan Africa, this analysis shows significant potential for reducing overall housing development costs in Uganda. Construction costs alone are 51 percent higher than in Pretoria, South Africa and all other major cost categories have potential for cost reductions through minimising relatively high input costs, as well as reducing process and holding costs incurred due to delays in the development process.

The value chain and cost benchmarking analysis in this report therefore highlight the opportunity for Uganda to create a more orderly response to the rapid urbanisation it will face in the future, given its relatively low current rates of urbanisation and current high levels of economic growth. However, the rapid urbanisation in Uganda’s urban centers (and specifically in Kampala and Entebbe) in the future will result in important shifts in the housing sector. This urban housing challenge will require different responses to what has been implemented in the past if Uganda is to successfully guide and manage urban growth and housing development. Uganda’s housing market already plays a critical and substantial role in its economic growth and sectoral diversification and should be an even greater contributor to Uganda’s economic growth and social prosperity in the future. The housing economy provides an excellent, sustainable market for locally manufactured goods and local services. However urgent attention needs to be given to the ability of Uganda’s local manufacturing and services sectors to support and grow local housing construction demands in the future, as well as its potential to improve its international competitiveness as a building materials exporter.