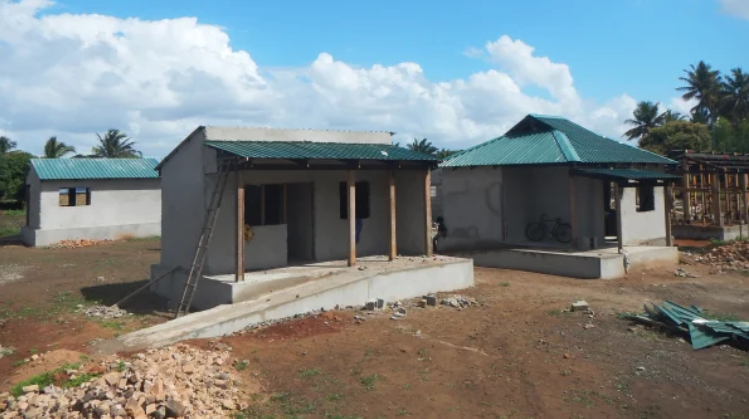 Cyclones Idai and Kenneth earlier this year had devastating effects in Mozambique, Zimbabwe and Malawi. More than US$4 billion was needed to help the countries recover, rehabilitate and reconstruct.[1]

Mozambique ranks third among African countries for exposure to risks from climate variability, behind Tanzania and Lagos.[2] Given the proximity of some of its cities to low-lying coastal areas, it was inevitably hit the hardest by Cyclones Idai and Kenneth. Power and communications networks failed, homes and livelihoods were destroyed, hectares of crops flooded, and infrastructure destructed – severely affecting communities living in these pockets of Mozambique.

These cyclones are increasingly viewed as a consequence of climate change.[3] They are making average temperatures and weather patterns more unpredictable, resulting in droughts, heavy rains and storm surges, floods, rising sea levels, heat waves, wildfires and excessive strong winds – leaving in their path a wave of destruction with economic, social and environmental losses, and even the loss of lives.

Africa has been identified as the continent most vulnerable to these impacts. The Climate Change Vulnerability Index for 2017 finds seven of the 10 countries most at risk from climate change are on the continent.[4] More than 2 000 natural disasters have hit Africa since 1970, affecting 500 million people and killing almost a million.[5] Temperatures are increasing faster than the global average. In a sample of 30 African countries, two-thirds are warming faster than the world as a whole – a trend expected to continue for decades to come.[6]

The 2018 Post-Disaster Needs Assessment points to housing as one of the most affected sectors in the wake of climate-related and other natural hazards. Housing is also the most important asset, and often the only significant asset, accrued by the poor. In this context, governments and other institutions such as the World Bank and United Nations are responding with initiatives to build climate resilience and resilient housing. A number of programmes are being implemented in Mozambique, as well as other initiatives in Malawi and Rwanda.

What is resilience and why is it crucial?

Resilient housing is the capacity of human settlements to cope with shocks (environmental, economic and social) and respond to these over time.

Proximity to urban centres and transport hubs increase access to employment opportunities. Job migrants are often too poor to rent or buy in the formal housing market.[7] However about 90 percent of urban expansion in developing countries is near hazard-prone areas.[8] The paradox is that these areas are characterised by sub-standard housing, and as a result the poor are concentrated in high density, low-quality living conditions. The poor often reside in informal or fragile housing, located mainly in peripheral areas, including along riverbanks, on hillsides and slopes prone to landslides, near polluted grounds, on decertified land, in unstable structures vulnerable to earthquakes, and along waterfronts in coastal areas, increasing exposure to climate change.

Furthermore, homes are often built incrementally, with low-quality materials and techniques that are not climate resilient.[9] In a country such as Mozambique where almost half of the population lives in poverty[10], the absence of climate-resilient responses will exacerbate poverty levels. A lack of (financial) resources makes the poor substantially more vulnerable to environmental shocks. Therefore, in developing climate-resilient responses, the capacity of the poor to anticipate and respond, or even have access to adequate and resilient housing, should be considered.  Environmental factors include ensuring houses are not built in flood-prone areas.

The socio-economic implications of climate change have an economic cost, and push poor communities into a vicious cycle of vulnerability and entrenched poverty. Adopting resilient techniques can reduce the associated costs relating to health and loss of productivity, possible displacement and risks such as the use of contaminated water.[11] The cumulative (individual and collective) effects can influence decisions around land management (unregulated urban growth), construction techniques, implementation of water and sanitation programmes, and low investment in education and poverty reduction.[12] In Mozambique, for example, repeated climatic shocks (in the event that global carbon emissions are not constrained) are estimated to contract the economy by up to 13 percent by 2050.[13] This will most likely affect the populations in the Beira corridor.

Targeting resilience building for the poor is therefore an economic, social and environmental imperative.[14]

There are several models and initiatives for resilience emerging on the continent. High-level programmes include the World Bank’s Global Program for Resilient Housing. This programme focusses on complementing rebuilding efforts and improving preparedness before disasters. The programme has so far been tested and employed in Latin America and the Caribbean, and Southeast Asian countries such as Colombia, Mexico, Peru, Saint Lucia and Indonesia. The aim is to protect individuals and families and their most important investment, i.e. the housing asset.

The impacts of climate change in Mozambique led to the establishment of the USAID’s and UN-HABITAT’s Coastal City Adaption Project (CCAP) in 2015. The programme supports local governments and communities in the cities of Pemba and Quelimane to develop affordable solutions and techniques for building. Importantly this includes design elements and resilience throughout the construction process (i.e. foundation, walls and roofing) (see Table 1).

Similarly, the World Bank’s Cities and Climate Change Project aims to strengthen municipal capacity for sustainable urban infrastructure and environmental management in Mozambique. The Pilot Programme focusses on the coastal city of Beira, although it is not the only city at risk from climate variability. A core component of this project’s resiliency includes improved management and development of natural drainage systems and longer-term measures of developing green infrastructure.

Although resilient building materials and techniques may turn out to be more costly than traditional methods in the short term (in Mozambique this can be up to 25 percent more), by avoiding the costs of frequent rebuilding and damage to property, savings are expected in the long term.[15]

The Joint 2019 AUHF and IUHF Conference  also shed light on some of the climatic solutions being developed in landlocked countries such as Malawi and Rwanda. In Malawi, Durabric is increasingly being used as a more sustainable alternative to traditional burnt clay bricks (Figure 1). The compressed-earth stabilised block is made using a combination of locally sourced materials – earth, sand, cement and water. It is a more affordable alternative, curbs deforestation and carbon emissions, and builds local capacity. 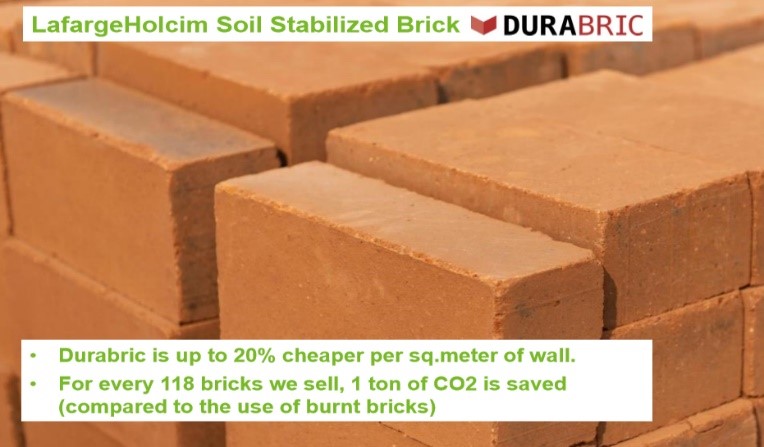 The PROECCO Programme, which promotes climate responsive building material production in the Great Lakes Region, optimises design and material use. In Rwanda, housing construction involves the use of more modern, high-quality brick (Figure 2).  Import replacement of buildings materials such as cement is core to the Rwandan model and has reduced construction costs by a third, while also boosting local industrial growth. The modular design elements of the construction process increase the potential of the local industry to supply affordable housing for rapidly urbanising cities.[16] The strength of the Rowlock Bond walling system and its para-seismic performance has proved efficient in earthquake-prone countries such as Nepal. 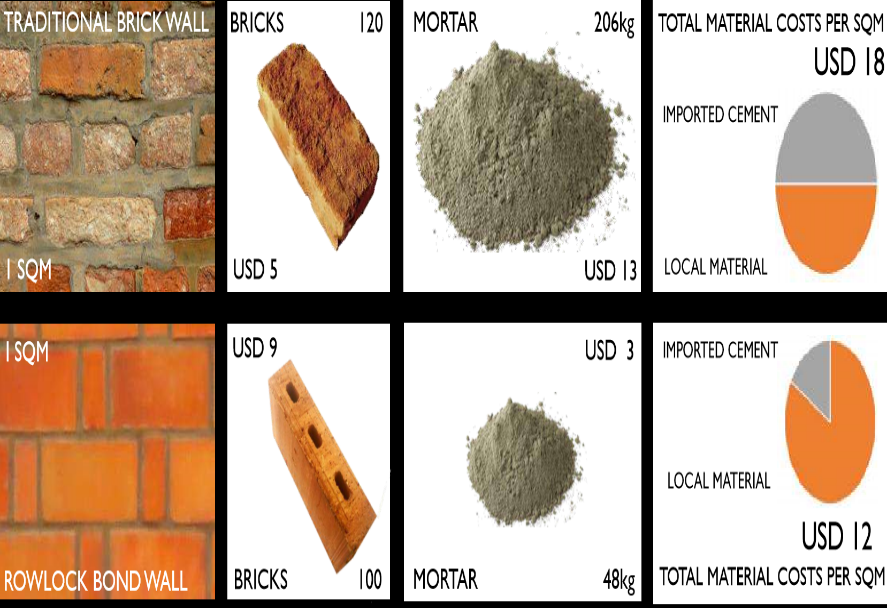 Climate change imposes a huge challenge for Africa’s current and future development. This means the need to integrate resilience into development practice cannot be overlooked. It is particularly important to recognise the unequal burden on the poor and the impact at the household level, which threatens their ability to recover and rebuild. This requires targeted interventions. The challenge lies not only in in constructing new resilient affordable housing, but also retrofitting existing housing structures.

The following key lessons can be drawn from emerging efforts to build resilience, in Mozambique and elsewhere on the continent:

[5]Shreeshan Venkatesh. “Africa: The least responsible, but most vulnerable to climate change.” Down To Earth, 29 May 2019. https://www.downtoearth.org.in/news/climate-change/africa-the-least-responsible-but-most-vulnerable-to-climate-change-60669

[7] Fiona Anciano and Laurence Piper. “How cities can approach redesigning informal settlements after disasters.” The Conversation, 5 May 2019.  https://theconversation.com/how-cities-can-approach-redesigning-informal-settlements-after-disasters-116318.