When we talk about affordable housing, we fixate on the affordability of the capital cost of the house, that is, what it costs to build it, and the sale or rental price for which it is then offered while we overlook the longer-term operating costs such as what it costs to run it on a day-to-day basis, over time. When we consider the monthly costs incurred by the homeowner or tenant, we calculate the affordability of mortgage repayments and rental charges, but we overlook the affordability of
ongoing maintenance and management costs, as well as the costs of services. By not taking these ongoing, longer-term costs into account with any level of detail, we may be undermining our affordability calculations overall, and putting at risk the long-term sustainability of the development, the housing unit, and the household themselves.

Typically, there are three models for managing the long-term operation of a residential unit and a development:

In line with the above, this blog seeks to shed more light on the issue of service charge with the aim of creating a better understanding of what it is, what services are covered by the fee, the different ways through which the rates are arrived at and the rationale supporting the same, and why service charge is a vital consideration in the context of affordable housing in Kenya.

What is Service Charge?
By definition, service charges are fees paid by the homeowner or leaseholder to the managing agent (whether the landlord or the property management company) in exchange for services agreed upon under the lease terms1. This enables the landlords to recover the costs incurred in providing those services. The services covered under this fee vary from one project to another depending on available amenities and services offered to the residents and these may include; common area cleaning and lighting, garbage collection, security management, borehole management, swimming pool management, elevator maintenance, sinking fund, gym, landscaping among others. For some properties in Kenya, the service charge may cater to the cost of utilities such as household water and electricity consumption. However, this is a rare scenario as most households pay for utilities to the suppliers such as the Kenya Power and Lightning Company (KPLC) directly.

During the first half of the year (February- June 2022), CAHF embarked on a field study aimed at collecting data on service charges from residential developments within the Nairobi Metropolitan Area. The study was aimed at understanding how service charge rates are calculated or arrived at, and the services they cover in different residential developments. A descriptive cross-section research design was employed in this study. Qualitative and quantitative data was collected through interviews with developers and estate agents. 14 projects were selected through simple random sampling techniques, though only 4 projects were included in the final sample table included herein as data provided for most of the projects was scarce mainly because they were reluctant to share all the information.

Different developers or property managers have different service charge rates that have been ingrained in the sub-leases agreed to by the tenants. Often, the charges are also included in the Letter of Offer (LOO) in the case of a unit purchase. The service charge is payable monthly in most cases though this may differ depending on the subject lease agreement. In Kenya, there is no standard way or rationale used by developers or property managers to compute service charges but overall, the proportion of service charges depends on the number and quality of services provided. Buildings with high-quality amenities such as swimming pools and high-speed lifts have high service charge rates. Though the issue of service charges is not widely discussed in Kenya, it makes up a significant proportion of household income spent on housing. The method of computation is not often openly discussed by developers and though some new projects benchmark against market rates, it is difficult to establish how those market rates are arrived at initially.

Speaking to the fourteen formal property managers within the Nairobi Metropolitan Area in Kenya’s housing market during the study period;

Below are the four sampled projects that provided the necessary information;

From the above sample, it is evident that the methodology of arriving at the service charge varies from one developer to the other, and is rather haphazard. For rental properties, the monthly unit rental charges quoted in the lease agreement are often inclusive of both the rent price and service charge and are thus submitted together at the end of the month. From our sample, the service charge is approximately 10% of these monthly unit charges as shown below. 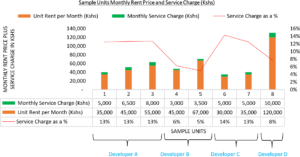 Though inscribed in sale or lease agreements, some developers or property managers may alter the service charge rates in some cases; where the property is handed over from a developer to an independent property management company, from one property management company to another, or this could be done by the same party where there is a change in operating costs and the prevailing service charge collections are not sufficient or where the actual costs, once unit owners have moved into their units, exceeds the projected operating cost during construction. Implementation of these changes demands tenant involvement as it could require a significant adjustment to a household’s housing budget. One of the above-sampled developers adjusted the service charge by approximately 84% to cater to increased operation costs within the residential development. This faced resistance from the tenants noting that the additional charges added an unexpected financial burden that was not provided for in their initial agreements.

The Kenya housing market lacks bodies or authorities to regulate service charges, and the determining of the rates is at the discretion of the developer or property manager. This has over the years exposed some tenants to property managers, who impose exorbitant rates for services that are sometimes not rendered. Failure to comply, the tenants could be denied essential services which jeopardize the quality of life. In some cases, tenants may be denied access to the premises, evicted even if they have paid rent, or their names listed down on a ‘list of shame that’s publicized within the premises. These conflicts may escalate and end up in the corridors of justice, case in point Civil Case 104 of 2011, where a tenant was ordered by the property manager to pay a monthly service charge of Kshs.42,340 (US$360) despite the existing Memorandum of Understanding that was mutually agreed previously quoting a service charge of Kshs.25,000 (US$213) per month plus Kshs.4,000 (US$34) being Value Added Tax.

Legally,[1], the property management company is expected to account for service charge usage and the accounts should be subject to audit.  To avoid abuse, the lessee has the right to inspect book of accounts and demand accountability from the directors of the management company. However, many tenants are unaware of this right and become victims of exploitation.

There exists no standard rationale for deriving serving charges in the Kenya housing market, both legally and as market practice. This exposes tenants to exorbitant charges by some developers or property managers and therefore potential home buyers and tenants must carefully consider terms and conditions stipulated in the sale or lease agreements and especially service charge rates when buying or renting a house. Service charges are not one-offs and should therefore be financially sustainable to a household. Housing affordability is a major challenge in Kenya with the majority of the existing and incoming housing supply, being unaffordable to the median income earners. Adding on other associated costs such as service charges and the cost of utilities continues to fuel unaffordability. As both the government and private sector continue to focus on and drive the Big Four Agenda, on the provision of affordable housing, it would be important to consider the development of a standard way of computing service charges. This will not only guide incoming developers but also contribute significantly to the sanity of the housing market and contribute to housing affordability.

Data is fundamental to investment, particularly so for affordable housing. As mentioned earlier in the blog, despite sampling 14 residential projects within the Nairobi Metropolitan Area, only 4 projects were willing to provide adequate data on their projects to facilitate this study. This draws attention to the difficulty in accessing publicly available and credible data on housing which would otherwise support investment decision-making for stakeholders in the sector including; potential homeowners, developers, and property managers. This is a challenge CAHF aims to address head-on through the Open Access Initiative which aims to harness the collective experiences and learnings produced by participating organizations through their investments in affordable housing. The Initiative seeks to focus on the project’s 4Ps; product, process, people, and performance.